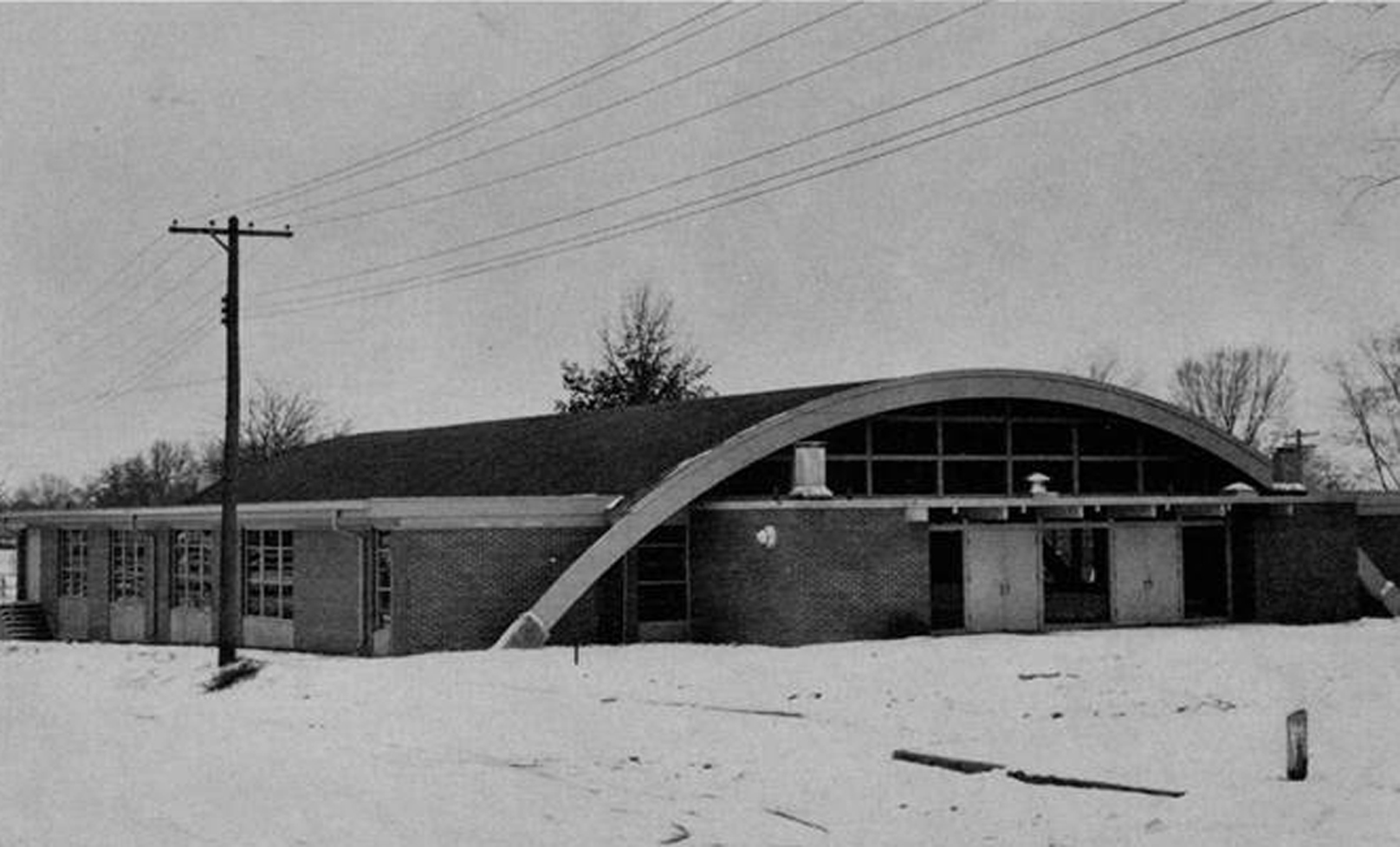 In 1956 the school began construction on the new gym. I thought the old gym was just fine because that’s where Dad’s team practiced and the town didn’t need a new one. But no one asked for my opinion, because I was four-years-old. At least the junior high team still used the old gym to practice.

The new gym was ready for the 1957 basketball season, and since Dad was the official scorer, I got to attend the games. I would sit at the scorers table and watch the players battle each other. Sometimes, we would attend the road games. Those were special because I got to visit other small towns. Clay City, Noble, Cisne, Sumner, Dieterich, Louisville, Patoka, Ramsay and Farina were other teams in the Midland Trail Conference over the years. Might be when I developed a love for small town America.

The new gym was so different than the old one. It was huge! Twice the size! The main entrance was at the same level as the high school, but the court was lower. Built into the ground. Kinda like the Big House where the University of Michigan plays football. Our gym was just a bit smaller. The capacity might have been 500. Maybe less. There were several rows of bleachers in a horseshoe around the court. It was much brighter in the new gym, and the roof was curved. I don’t don’t who designed it, but I’ve never seen another one quite like it. Everything was shiny and new. The floor gleamed in the light. I remember buying pop and a bag of popcorn and getting change back from my quarter. Or maybe a dollar, but it was cheap by today’s standards.

Basketball was important in small towns across Illinois. Perhaps not to the same extent as in Indiana and Kentucky where high school basketball was a religion, but close. The best basketball was played in small gyms across towns in the southern third of the state. Check the list of state champions, and you’ll find the names: Centralia, Mount Vernon, Herrin, Marion, Collinsville, Pinckneyville. All towns in southern Illinois. I idolized the players in their colorful uniforms and longed for the day I would play on the same court.

Both the old and new gyms were used for more than basketball games. School plays, class carnivals, homecomings and proms would take place on the stage and floor. I suppose I’m saying the high school gym was a hub of activity in many small towns.

We moved away from Kinmundy in 1963, but would often return for visits because that’s where Mom’s family lived. I continued to play basketball because I loved the feel of a leather ball in my hands and the sound of a shot swishing through the net, and over the years I played in many different gyms against players of different skill levels. I played in high school and beyond. I finally stopped playing park district basketball at age 39.

Sixty years ago I was ten years old and in fifth grade. Mr. Woods was our teacher, and he became my first official basketball coach. We weren’t old enough to play on the junior high team, but Mr. Woods organized a team for us. We even had uniforms. Jerseys with numbers at least. He scheduled games against other elementary schools in the area. Some were at home in our elementary school, others were away games. Back then there were still small schools out in the country. Not exactly the one-room schools of Mom’s era, but only slightly larger. The game I remember most vividly took place in the new high school gym. I don’t remember who the opponent was, but it didn’t matter. I would like to think my team won the game, and I made the winning shot, but that’s probably not what happened. The important thing to me was I was playing on the same court as my heroes, and my sneakers made the same sounds.