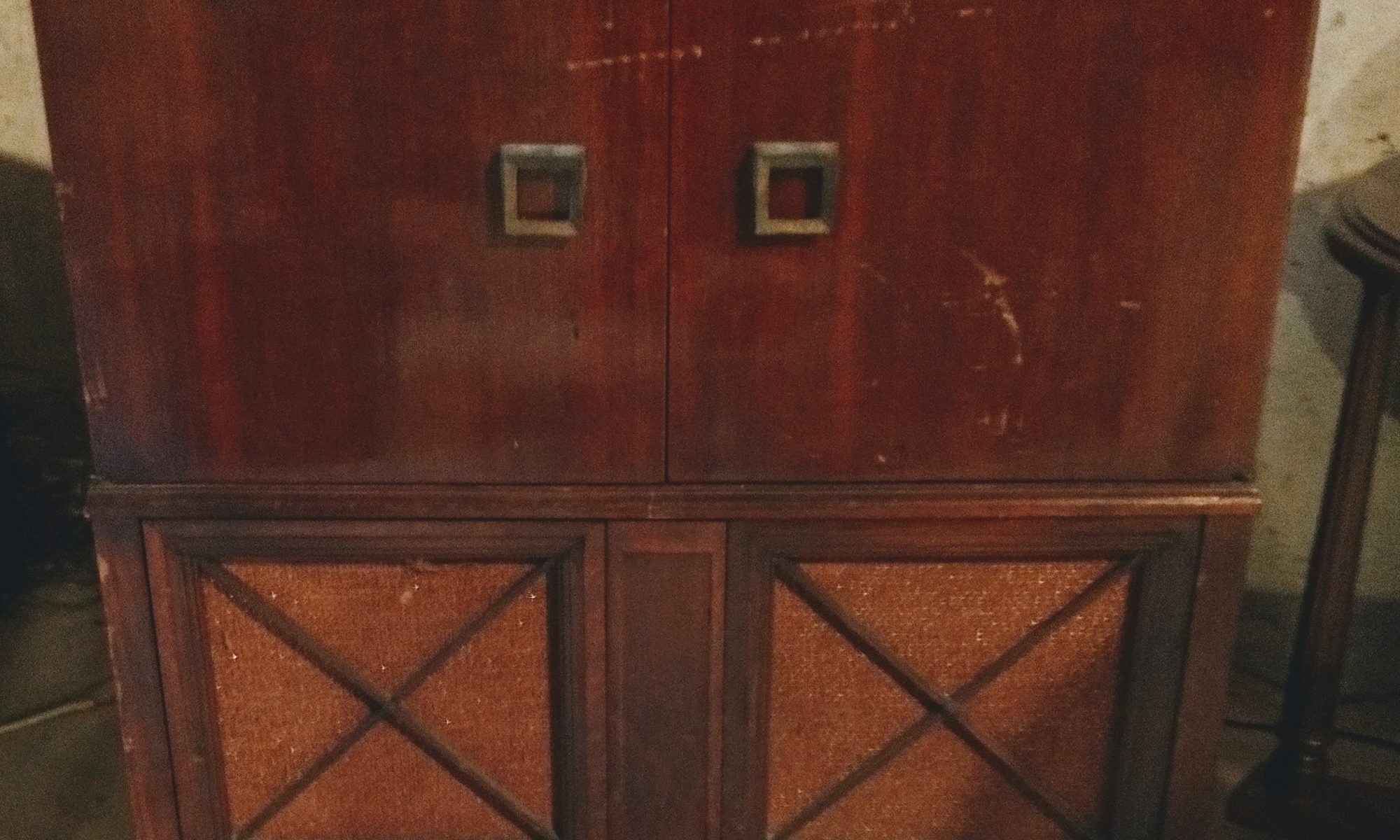 I remember the first television my parents ever purchased. At least I think it was the first. It was in the mid-fifties and it appeared gigantic to a small child. I don’t remember the brand name, but in those days a TV was a piece of furniture. The cabinet was perhaps more important than the screen.

We had two important pieces of furniture in the small living room other than the couch and matching chair. One was the television and the other was the combination radio and record player. I remember the brand name of the radio because I went downstairs and checked. It was an RCA Victor and the label is still attached inside the door. That’s right! I still have it in my basement. It hasn’t worked for thirty or forty years… I’d be afraid to plug it in. It might blow up. But I still have it! For years I used it to hold my stereo components. Not inside the cabinet but stacked on top. This console served different purposes over the years. Its original purpose was to listen to Cardinal games on the radio. There was… and still is… an antenna coil in the back. It only received AM stations because FM wasn’t a thing back then. It existed. Edwin Armstrong developed it back in the thirties, but it wasn’t anything like we have today. But that’s another blog.

Our radio/phonograph console had not one but two turntables in the cabinet. That’s right! We had two record players. Pretty fancy for Kinmundy in the early fifties. One turntable played 45s and the bigger turntable in the bottom of the cabinet played 78s, 33s and 16s. What? You’ve never heard of records played at 16 and a third revolutions. They were used for spoken language and are rather rare today. The lone speaker was in the bottom right. Two turntables but only one speaker. Go figure.

My parents had a small collection of records. Mostly 78s and 45s. They favored Country & Western (That’s what it was called back in those days) and Southern Gospel. I listened to Hank Williams, Hank Snow, Eddy Arnold, The Blackwood Brothers, The Statesmen Quartet and other similar artists as a child. Somewhere in the house there might be a few of the old 78s still around in dusty boxes. I’m saving them for my old age along with my collection of ancient baseball cards.

When Mom decided to get rid of the old TV and radio consoles, I jumped at the chance to claim them. I used the old TV as a stand for my more modern TV, and you know how I used the radio cabinet.

Back to the television though. In the early fifties television sets used cathode ray tubes and other assorted vacuum tubes to produce the image and sound. Some sets might have up to 36 tubes inside. I didn’t count them as a child, but saw that info on Wikipedia so it has to be correct. Right? Anyway, the tubes would not last forever. Right in the middle of an important television show, the set would go black or fuzzy or snowy. It just wouldn’t work correctly. Dad would have to place a call to the TV Repairman and he would show up at the front door almost instantly carrying a large case. He would set the case on the floor and open it. It was filled with vacuum tubes of all shapes sizes and other technical electric stuff that I still don’t understand. I would watch patiently as he risked life and limb to find the faulty tube and remove it. That’s true because those tubes could hold a charge even after the TV was unplugged.

He would inspect the faulty tube and scratch his jaw. He would compare it to many in his case. Eventually, he would pull the correct the replacement out of his case of hundreds of tubes. We would have a picture again. At least until the next tube broke. The TV Repairman was like a superhero to us kids. Not only could he replace the faulty tube, he could adjust the temperamental vertical and horizontal hold buttons so the image didn’t flip up and down or from side to side. Modern TVs don’t even have those controls anymore. Too bad.

Alas, there are no more TV Repairmen left in the world. No more cases full of magical vacuum tubes to be opened to the delight of children. TVs are disposable now. If it breaks, it is tossed away, or maybe recycled.

I still remember a time when you could call your local superhero and he would appear at your door to fix the fancy piece of furniture sitting in front of the picture window in your living room. Do I miss having an old unreliable TV? No way, but I do miss the TV Repairman. He was my friend. Thank you for all you did, Lew Hendricks. You are still missed and remembered.