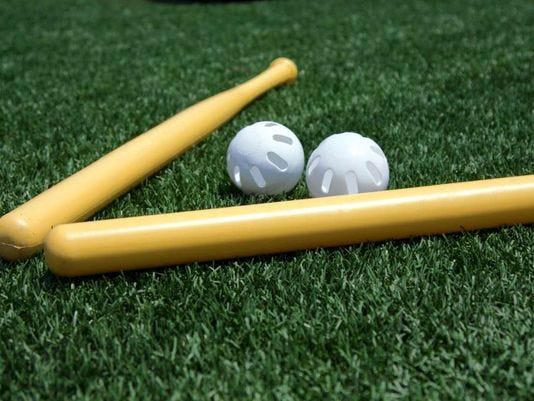 If you never played wiffle ball as a kid, you don’t know what you missed. Nowadays, people play wiffle ball like a real sport. They play on regular baseball fields, have real tournaments and crown champions. I even watched a tournament on TV.

But that’s not the kind of wiffle ball I’m talking about. My cousin Paul and I played REAL wiffle ball. One man (boy) against another. You had to chase down every ball that was hit or swung at and missed. Foul balls hit over the fence were usually the batter’s responsibility to retrieve. And we liked to play in areas with fences. If at all possible, we didn’t use the wiffle balls with holes in them. We would but the solid ones. They were harder to throw curves, but more realistic. They even had seams in the plastic to imitate real baseballs. Plus, they lasted longer.

We would pick a team. I was always the Cardinals. He was usually the Yankees. We would create a lineup. We might have invented Fantasy Baseball without realizing it. Anyway, you made your lineup and you had to bat the way your player did. That’s how we learned to hit from both sides of the plate. We would even imitate the player’s stance. Try hitting out of Stan Musial’s stance. It ain’t easy.

Part of the fun of wiffle ball is finding, or creating, the place to play. One of my all-time favorite places was my grandparents’ garden. They lived on a farm in the country outside of Kinmundy, Illinois. When they were able, they had a garden directly behind the house. The garden was fenced on all four sides and was almost a perfect square. I can see the wheels turning in your head. A perfect square. Fences. Grass. A nearby house. All of these contributed to the perfect diamond on which to play wiffle ball. The garden wasn’t large enough to play real baseball. The proximity of the house made that impossible. However, wiffle balls don’t normally travel as far or break windows. Later in their life, they were unable, or didn’t need, a garden for their sustenance. That’s when Paul and I created our own Fields of Dreams.

Since we were playing one on one, much like we did in basketball, we created our own set of rules. Catching the ball in the air was obviously an out, but there were other ways to retire a better. Catching a grounder before it reached a certain line was an out. There were rules for doubles, triples and homeruns. We had a fence, so a homerun was obvious. If you hit the ball over the fence it was a homerun. Simple, right? We even had a shorter right field than left field, but if the wind was blowing from the east, it was nearly impossible to hit the ball out of the park in right. In straight center field was the ‘turkey house’ as we had always called the building. There were never any turkeys kept in there in our childhood, but maybe at one time… Anyway, it was something to aim for. In right field, maybe six feet inside the fence was the Concord grape arbor. I loved sucking the juice out of the grapes and spitting out the pulp and seeds. Approximately twenty feet past the left-center field fence was the house. It would take a prodigious wallop to hit the house, but I accomplished it one at least one occasion. Paul may not remember it, but I do. Unfortunately, we didn’t have statisticians recording every pitch like real baseball. We used the garden as our field for many years, but eventually, we grew up.

After college, Paul moved to an A frame house in the country north of Bloomington/Normal. His backyard became our Fenway Park. We had our own Green Monster except it wasn’t green and was in right field. It was the back of the house and garage. It was close enough to land a homerun on the roof with a pop-up if the wind was from the north. However, if the wind was from the south (blowing right over the house) it was nearly impossible to smack one out of the park. Case in point. I was batting lefty and nailed a pitch. I couldn’t have connected more solidly in a hundred years. The ball flew halfway to the moon and was hit hard enough to go completely over the house except for the wind. I hit it too good and too high. By the time it came back to earth, the wind had carried it into play and Paul caught it for an out. Sometimes it’s better to be lucky than good.

It might have been at the A frame where we first used a strike zone. The strike zone would be a rectangular box placed behind the hitter. To be called a strike, a pitch need only hit the box. It didn’t matter from which direction. You could theoretically curve a ball from behind the batter, hit the edge of the box and be a strike. Probably never happened, but possible. In our rules one strike was an out.

Now I am too old to play baseball, or even checkers, but I bet Paul and I could still find a Garden of Dreams somewhere and manage to play our version of the World Series. I would bribe one of the grandkids into retrieving the ball though.