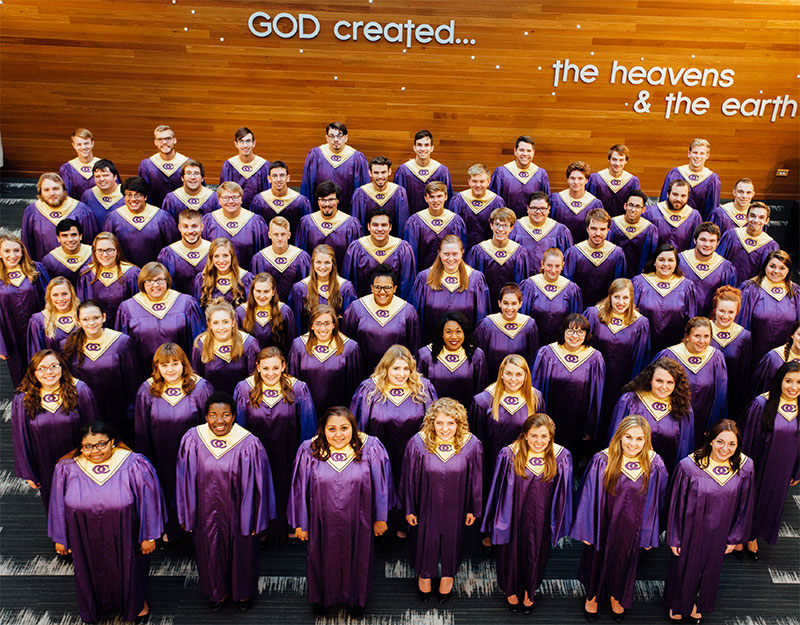 Sunday evening I decided to forgo watching the NCAA basketball tournament to attend a performance by the Orpheus Choir of Olivet Nazarene University. I am a huge college basketball fan so this was a major sacrifice on my part. Duke University would be playing at the same time as the concert, and I love to root against them for the same reason I cheer for any team playing Tom Brady and the Patriots. I hadn’t heard the Orpheus Choir in many years and realized the chance any of the students I had heard before still being in college twenty-five years later would be rather slim. I picked up my son and grandson and met at the church to carpool to Chicago Heights. Eight of us crammed into Tyler’s minivan and being the oldest by several decades, I grabbed the front passenger seat.

We arrived at the Chicago Heights Church of the Nazarene early enough to have our choice of seats. I took a program from one of the friendly ushers and entered the sanctuary down the middle aisle. Since no one wanted to choose where to sit, I picked an empty row and we claimed it for our own. I sat in the next-to-last seat by the side aisle with my grandson, Ben, next to me. Pastor Randy welcomed everyone and prayed for the service. Then the choir made their entrance. They used the side aisles and surrounded everyone. Ben was thrilled to see them in their fancy robes. I knew he was excited because he was grinning from ear-to-ear. (Sorry for the cliché, Denise, but this is just a blog.) There were choir members standing right next to us. I could have thrown Phoebe’s baby doll and hit them with ease, but I didn’t want to upset Phoebe. I noticed that college kids are a lot younger-looking than when I was their age. I glanced around the sanctuary and tried to count how many singers there were. I counted up to ten and then had Phoebe help me. She counted to seventy and then stopped. She is almost two now and a whole lot smarter than me. Anyway, the choir began to sing and I noticed the young lady standing at the end of our aisle. To use another cliché, she looked as pretty as a picture and had the voice of an angel. I hope she, or any of her friends, never read this because she will be embarrassed and her friends will use it to blackmail her or something. After singing a couple songs, the choir took their places on the platform. Somewhere along the way I perused the program and found a section listing the members of the choir, their hometowns and majors. I happened upon one name and was surprised to read she was from Salem, Il. I found that interesting because I was born in that town many hundreds of years ago. I thought it might be interesting to meet her and ask her if she had ever heard of Kinmundy.

I should explain that I would not have even been at the concert except I felt the Holy Spirit urging me to pass up the basketball games.

Later at the end of the program, the choir returned to their positions along the walls of the sanctuary. I again noticed the same young lady standing a few feet away. I looked at the doll in my hands and resisted the urge to throw it at her. The choir sang their last song and exited. Tyler asked if we wanted to stay for the refreshments or head back home. Since there were cookies, Ben wanted to stay. Actually, I wanted to grab a couple cookies too because I hadn’t eaten anything for dinner. We headed to the gym and I decided to be brave and ask one of the choir members if they new the young lady from Salem. To protect her privacy, I will refer to her as… uh… how about… I’ll call her ‘Ashtyn.’ That’s a pretty name and no one will ever guess her real name. The first person I asked did not know her. I figured it wasn’t meant to be. I helped Phoebe eat her cookie and spotted two ladies who looked young enough to be first graders and asked if they were members of the choir. They said they were. Again, I asked if they knew… what name was I using? Oh, right. ‘Ashtyn.’ I overcame my natural shyness and asked if they knew her. They did! I asked if she was there tonight and they looked around the gym and pointed her out. I thanked them and decided to be brave and approach ‘Ashtyn.’ I took Ben along because he will talk to anyone. He’s six remember. I walked over to the round table on the far side of the gym and three of the students looked at me. I thought about running away, but my feet were stuck in cement and I couldn’t move. I managed to summon up the courage to explain my presence.

“I’m looking for… ‘Ashtyn,’” I said softly hoping not to be laughed at.

One of the young ladies turned around and said, “I’m… that person whose identity I am protecting.”

You have probably already guessed that it was the same young lady with the voice of an angel who was standing only a few feet away before. I was blown away. I asked her if she was indeed from Salem and when she answered in the affirmative, I blurted out that I was born in the Salem Hospital. I was even more surprised to learn that she indeed knew of Kinmundy. There are only a handful of people in the whole world who have ever heard of my hometown and the chances of ever running into one of them is larger than the odds of winning a large fortune playing the lottery. Twice. We talked for a moment and she asked me if I knew someone. I’ll call him… uh… I need a good name to protect his privacy… how about… Okay, I’ll use the name ‘Denzel.’ She asked if I knew this person, and lo and behold (Okay, last cliché for this blog) Not only did I know this person, but we were in the same class in school! What a small world.

Then she surprised me even more by saying, “He’s my grandfather.”

After fixing my jaw and regaining the use of my voice, I managed to say something totally stupid but she was kind enough to pretend I had some degree of intelligence. Having Ben and Kevin with me saved the day. And to think none of this would have happened if I hadn’t listened to the Holy Spirit telling me to skip the basketball games and go to hear the Orpheus Choir.

When I got home and checked the scores, I learned that UCF almost took out Duke with a last second shot. I wonder if the result would have been any different had I been watching the game on TV.