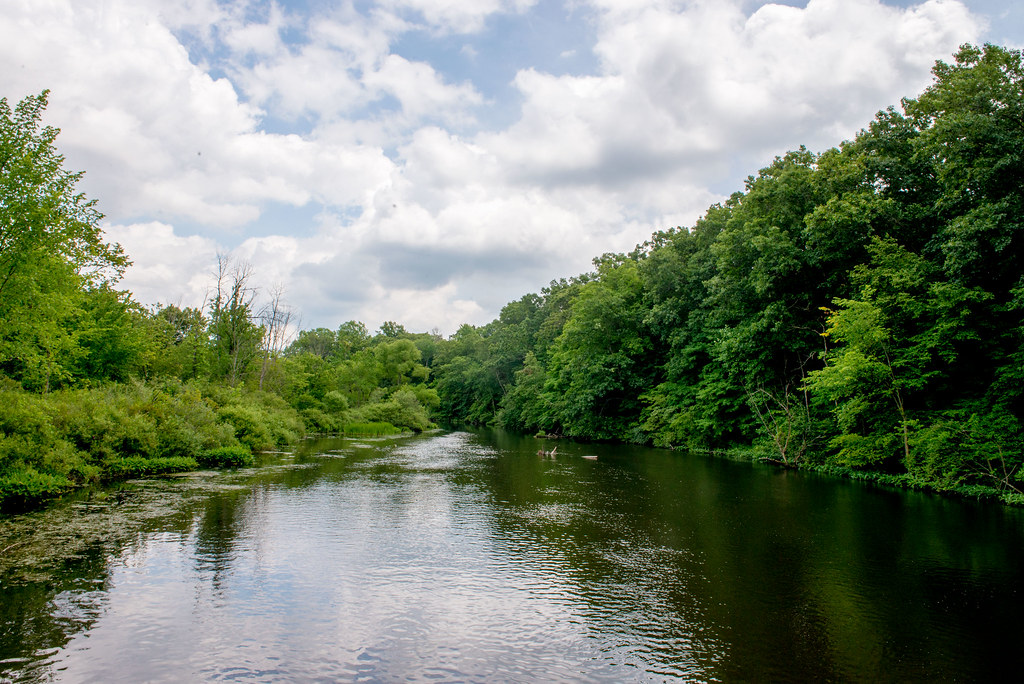 Many years ago my wife and I joined our friends, who shall be referred to as Richard and Kathy to protect their privacy, on a month long adventure from Sturgis City, Michigan, to the mostly unexplored wilderness of Northern Indiana. After reading, and being inspired by, a book by the late naturalist, John Clayton, we planned to camp and live off the land. We packed up the rented 1946 Willys CJ with all the gear it would hold. One backpack, the ladies’ purses and two small toiletry bags.

“Be careful,” Kathy’s mom said with tears in her eyes.

“We will,” Kathy replied.

We waved goodbye to Kathy’s parents, who were sure they would never see their beloved daughter again, and headed due south along Miami St.

Kathy’s face was buried in the 1952 McIlherny’s road atlas. “Hold on. I’m trying to find our location on the map.” A few seconds later she pointed and said, “Straight ahead.”

“I don’t think this is the way,” I said two hours later.

We finally emerged from the wilderness onto a dirt road.

“Sorry about ruining your wheat field,” Richard hollered to the farmer sitting in a wooden rocking chair on his front porch. “We got lost. Do you know how to get to Indiana?”

He raised his shotgun, aimed it to his right and pulled both triggers.

“Thanks,” I said wondering how quickly he could reload.

We made our way along a rutted National Forest road and came to the border between Michigan and Indiana. We paid the toll of $1.25 and three glass beads at the gate staffed by two members of the Mohican tribe.

The CJ bounced along the dirt road, negotiating potholes deeper than the Black Canyon of the Gunnison and, somewhere along the way, ejected all our gear except for Kathy’s purse and the toiletry bags. We forged ahead undaunted.

“Do we have a destination in mind?” I asked holding on for dear life as the CJ descended a 37 degree, off camber hill.

Kathy nodded and answered, “Native Americans, of which I am a descendant, tell of a legendary river in the wilderness leading to the tallest undiscovered waterfall in the six county area. We’re hoping to find it.”

I looked at my wife and caught her eating a Snickers bar. Richard and I learned the women stashed snacks in their toiletry bags in case we didn’t find anything to eat along the way.

“If we find this legendary river, how are we going to travel on it?” I asked.

Richard looked at me and shrugged.

Ten days later, totally out of food, water and clean underwear, we stopped to camp under a large buckeye tree.

“Where are we?” I asked. “How much farther to the river?”

Kathy checked the atlas. “I’m not sure.”

I took the atlas from her, turned it right-side-up and gave it back.

“Oh! Now I know where we are. We need to go that way.” She pointed to the west.

We journeyed on, but after listening to the women complaining about pushing the CJ up the side of the mountain for two days, we abandoned it. It had run out of gas five days prior, and we had no way to contact Quadruple A. We resorted to bushwhacking through the dense rain forest using the nail clippers from my wife’s toiletry bag in hopes of either finding a road, a 7-11, a Dog N Suds, or the legendary river.

“Would this make it any easier?” Kathy asked pulling a four-foot-long machete from her purse.

“No, I think we’re almost out of the jungle,” Richard answered.

Seventy-two hours later, and nearly hungry enough to eat the package of Ramen noodles I had been saving for an emergency, we stumbled out of the rain forest onto a semi-cleared, flat area covered by weeds and barely discernible painted white lines. We noticed a ramshackle building at the edge of the clearing. We walked across the asphalt, up the rickety step and knocked on the door. After waiting for thirty minutes, I wiped away the spider webs and noticed a faded sign on the door which read “Out to lunch. Will return in eight years unless dead. Help yourself to whatever you find.” It was signed Daniel Boone and dated February 29, 1813.

Richard shrugged. “I don’t think the place is still in business.”

“Location is everything,” Kathy said with a shake of her head.

“What are we going to do now?” my wife asked after finishing the last of her secret stash of Zero candy bars.

We turned and headed down the step. Seconds later, the entire shack collapsed into dust.

“Boy! Were we lucky!” Kathy exclaimed.

Richard and I spent the rest of the afternoon searching the area surrounding the clearing for anything edible or a gallon of Mountain Ice water. The ladies thumbed through copies of Ladies Home Journal, which had miraculously survived the building’s collapse.

I stubbed my toe on something hard, hollered, jumped up and down for a time, then yelled, “Hey! I think I’ve found something.” I began jerking the weeds away and could see something shiny in the brilliant sunlight.

“What did you find?” my wife asked snacking on a box of Sociables she had hidden under her winter coat.

Richard helped me pull the weeds and two small Redwood trees away from what I now realized were two aluminum canoes built by the Harland Wolff company of Tonganoxie, Kansas. We struggled mightily, and were able to eventually free the canoes from where they had been abandoned two hundred years ago.

“Two canoes! One is a bit dented, but I think they might be watertight. There’s a broken paddle in this one.”

“Great!” Kathy said sarcastically. “Lot of good they will do unless we find the mighty Pigeon River.”

As we jerked one of the canoes out of the mud, Richard lost his balance and tumbled down the fifteen foot high embankment and into the fifty-foot-wide, one-and-a-half foot-deep river flowing lazily through the trees.