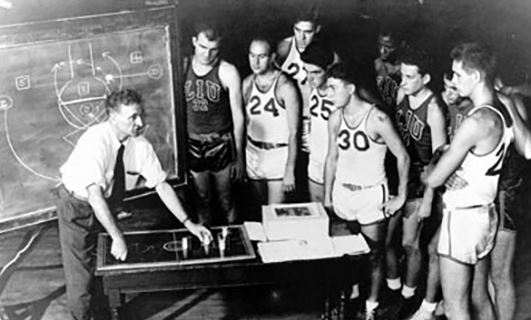 Collinsville beat Quincy Falls to claim third place before the Hornets took the court. Before the game Dad had a chance to talk one last time with Uncle Bill, or rather Coach Anderson. Coach Anderson thought Dad’s suggestion would work. The Lockport squad relied too much on their star player, Danny Chase. Coach wanted to make Chase work extra hard on the defensive end to wear him out. When the Hornets were on defense they planned to triple team Chase and make him give up the ball. If the other players could make shots, it would be a good game, but Coach didn’t think the supporting cast from Lockport was up to the challenge.

The Hornets won the tip and moved into their offensive set. Robert called for play number five and the Hornets scored on a backdoor cut. They hurried back on defense and didn’t pressure the Spartans. That alone surprised the Lockport coach who had been expecting full court pressure all game long. The Hornets set up their defense to stop Chase. Roger used his strength to push Chase farther out on the court than he wanted. Roger continually denied Chase his favorite spot. Robert and David guarded Chase from the front to deny easy passing lanes. Lockport held the ball for two minutes as they tried to work it in to their star player. A Spartan guard made an ill-advised pass into the lane and David intercepted. He passed the ball up-court to Robert and the Hornet fast break worked to perfection. Kevin Ambuehl scored on a layup and the rout was on. At the end of the first quarter, the Hornets were up by eight. They stretched the lead to fifteen by halftime. The Hornets grabbed every rebound and ran their fast break for easy transition baskets.

Lockport was confused by the Hornets defense. One time they would fall back into a zone and the next time they might apply full-court pressure. Coach Anderson never seemed to have to tell them what defense to use. Lockport’s Coach Bob Parzych couldn’t figure out how the Hornets were changing their defense so quickly. He watched Coach Anderson trying to figure it out, but gave up because Coach Anderson didn’t even talk to his team. He sat on his chair and seemed to be bored. Coach Parzych thought, “How can he be so calm. He looks like he’s reading a newspaper at the barber shop waiting to get a haircut.”

In the locker room at halftime Coach Anderson told his team, “They are so confused on offense. They are tentative because they don’t know what defense they will face every time up the court. Robert, it will be more difficult this half to see me. Do you want to call the defenses yourself?”

“Let’s try it, and if I screw up, then we will change back.”

What the Lockport coach, or any other coach they had faced, didn’t know was that Coach Anderson had worked out a set of silent signals for the defense. Most of the time the Hornets used a stifling man-to-man defense, but on occasions, they would switch to a zone. Coach used his position on the chair, or the bench depending on the gym, to signal Robert. Back home in their small gym, it was easy to see him along the sidelines. The size of the Assembly Hall made that more difficult.

Robert started calling the defense in the second half. Most of the time they stayed in the zone that kept it difficult for Lockport to get the ball inside. They would settle for outside shots. If the shot missed, the Hornets would grab the rebound and run. They pushed the ball up court for easy baskets. The Spartans didn’t give up though and cut the lead to nine points in the third quarter. Coach called a timeout to settle the boys down.

“Is anyone tired? If not then we were going to our zone press for the rest of the quarter. Make it look like man to man pressure at first, then drop into zone pressure. Everyone know your assignments? All right, let’s go!”

They scored again when Robert hit a jumper from the free throw line. The Spartans were finished. The third quarter ended with the Hornets up by twenty-two. The Hornets kept the pressure on and built the lead to twenty-nine with two minutes left in the game. Coach began substituting at that point. He removed the starters from the game, one at a time. David was removed with a minute to go and Robert came out of the game fifteen seconds later. The final score was 79-50. Robert saw TyAnn after the game was over, and she pointed to the scoreboard.

“You promised me we were going to win by thirty.”

“Sorry, Tanny,” Robert said as she jumped into his arms and he twirled her around.

“At least you made the winning basket,” TyAnn mentioned.

“You scored the basket that gave us fifty-one points. They only had fifty for the game. So I figure that your basket was the winning one,” TyAnn explained.

Robert didn’t quite follow her logic but it didn’t matter. They were state champs!

The night at the motel was magical. The boys gathered in Coach’s room and stared at the trophy.

“I don’t think it will fit in the trophy case, Coach!” Kevin Ambuehl said as he held the trophy.

“We’ll have to build a bigger case,” Coach Anderson announced. It was after two in the morning before Robert was able to fall asleep.