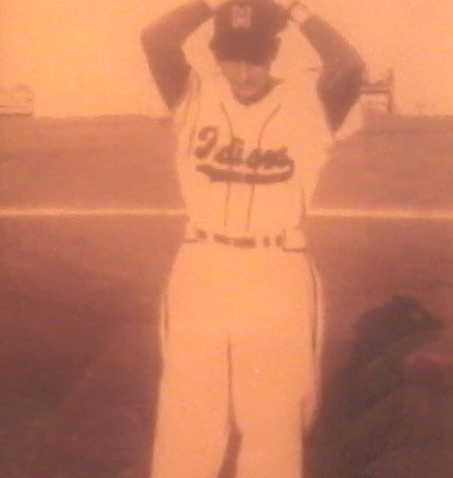 Bill Tockstein is my mom’s youngest brother. He is the last survivor of the three brothers and is approaching 90 years of age. A fine accomplishment, but he has many years to go to catch Aunt Ann (Mom’s older sister) who is 101. Bill graduated from Kinmundy High School in 1950: two years before I was born. When I was a youngster, I learned about professional baseball by listening to the radio on top of the kitchen fridge at Grandma and Grandpa’s house. It would be tuned to KMOX in St. Louis because they broadcast the Cardinal games. Harry Caray and Jack Buck were the announcers. Yes, that Harry Caray who later defected to the Cubs. Somewhere along the line my mom told me how she used to play catch with her little brother. She must have taught him a thing or two about baseball because because he grew up to become a talented pitcher. He pitched for the local high school team, played in summer leagues, and eventually signed a contract to play professional baseball. Most pitchers have a special pitch which gets them noticed. Bill’s pitch was the knuckeball. Not many pitchers threw one back in those days, but he did.

A few years ago my cousin Paul and I stopped at Uncle Bill’s house outside of town to see him. I specifically asked him about his days playing baseball. We ended up listening to his baseball stories for two, maybe three, hours. He told us about the different teams he played on, certain games he remembered and maybe a few of his rival players. I don’t remember all the stories, and they aren’t the focus of this blog. As with many other professional athletes, military service often interrupts their career. The Korean War interrupted Bill’s. I don’t remember everything he told us about the war, but he did play baseball with some other athletes serving our country. He was injured (by the enemy not in a baseball game) and earned a Purple Heart (or two, I can’t remember). He returned home, but I think his professional career might have been over.

I thought I knew most everything about Bill’s career in baseball until he mentioned his field of dreams. I didn’t know what he meant so he explained it to us. Between my grandfather’s house and Uncle Adolph’s house was a small field. Maybe forty acres. Doesn’t matter. It had always been a field of corn, beans or wheat, and that’s how I thought of it. During his high school years, Bill wanted a ball diamond of his own. Somehow he convinced his father (my grandpa) to let him use part of the field to build a diamond. It wasn’t just a matter of clearing the field, planting some grass, setting out the bases and whatever else it takes to play ball. This diamond was complete with a backstop, bleachers, concession stand, dugouts and parking for a hundred cars (or pickups.)

Okay, I’m kinda exaggerating a bit, but I do know there was a backstop. The rest is iffy. But this part is factual! There were organized games between real teams on the field. My father and his twin brother Bob played on the team. Paul’s father Charlie probably played, and the rest of the team was filled out with other local guys. They played against teams from the other small towns in the area. During this time period, the mid-to-late forties, people didn’t have the options we have today for entertainment. Watching a baseball game was a special treat for people who lived miles farther away from the middle of nowhere.

I was intrigued because I had never known about his field of dreams while I lived in town. By the time I began playing Little League at the age of eight, no physical evidence of the field remained. Not even the backstop. It had been turned into a field for crops again. I remember playing ball on many different diamonds in Kinmundy and the other small nearby towns, but I wish I’d had a chance to play on Uncle Bill’s field.

I don’t remember if we asked Uncle Bill if he had any photos of the field or not. I seriously doubt any exist because taking photos back in those days wasn’t a high priority. Now everyone takes photos with their phone constantly.

When he was a kid, Bill collected baseball cards. Since he was born in 1932, the cards he collected are now rather old. Some might even be valuable and worth a couple dollars. I hope so because I have a shoebox full of them in my closet.

I decided to go through the cards while writing this blog. I opened the shoebox and took out a stack of cards. There were cards of famous players like this guy named Ruth and guys named Gehrig, Cobb, Alexander, Johnson, Wagner and several others that might have been decent players. I was tossing the cards back in the box when I noticed one more. I didn’t remember ever seeing this one before, but I think it’s definitely the most valuable card in the bunch. Experts say ‘Rookie’ cards are the most valuable. I agree. I placed the rookie card of Bill Tockstein in a protective sleeve.