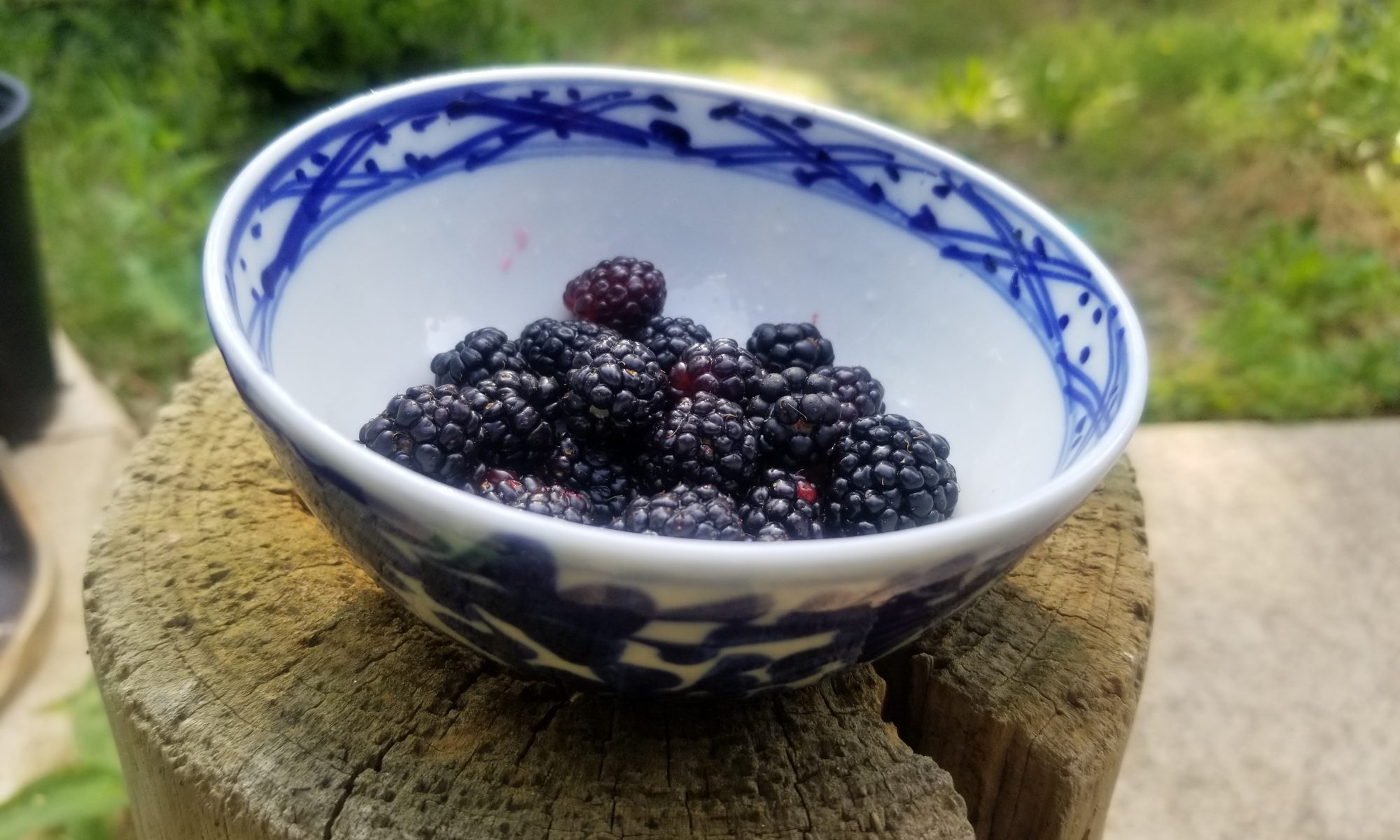 “I have a craving for a dewberry pie,” I said walking into the kitchen.

Me-maw looked over her shoulder at me as she washed the breakfast dishes. “You do, do ya? Have you been talking to your cousin Ray?”

“Just got off the phone. I haven’t had a good dewberry pie in ages.”

Ben and Allie looked up from their laptops in the living room for a split-second. I could hear the sounds of cars racing and machine guns rattling as they played their games.

“What is a dewberry pie, Papa?” Ben asked without taking his eyes off his game. “I’ve never heard of a dewberry. What does it taste like?”

“Can you buy them at the store?” Allie asked. “Darn it. My laptop froze, and I was about to win.”

I rubbed my jaw as I walked from the kitchen to the living room. I plopped down on the couch, put my feet on the ottoman and was joined by Scout. She sat on my legs and demanded my attention. I petted her as I thought about dewberries.

“If you pause your games for a moment, I will tell you about the legendary dewberry.”

“I need to make it to the next level,” Allie added.

“Is it another one of the made-up stories you put on your website?” Ben asked.

The kids heard me but kept playing their games.

“When I was a kid, maybe close to your ages, I would visit a farm outside of Troy, Illinois.”

“Why?” Ben asked without taking his eyes off the laptop. “Who lived there?”

“Do we know them? Have we ever met them? Are they like real old like your Aunt Ann?” Allie asked.

“I doubt if you’ve ever met them,” I said, listening to Scout purring softly. “I know you never met Uncle Earl because he passed away a long time ago. Many years before you were born.”

“What about the other person?” Ben asked. “Is she still alive?”

“She is, and the last time I saw her was when she visited my mother at the nursing home.”

“Yes,” I said then chuckled. “When I was a kid we called her Aunt Squirt.”

I shrugged. “I’m not sure exactly. It might have been because she was my father’s little sister. I probably heard him call her that, so I did, too.”

“What do they have to do with a dewberry pie?” Ben asked.

I clenched my jaw and felt my eyes moisten as I thought about the connection.

“Aunt Lorna was the only person I’ve ever known who could make a dewberry pie. Her dewberry pies were the best in the whole world. Probably the best in the universe, but the dewberries only grew in a secret location out in the fields around the farm.”

I knew I had their interest because they paused their games, looked at me and asked, “Are you making that up?”

Allie set her laptop on the coffee table and sat beside me on the couch. Ben sat on the ottoman and petted Scout.

“Do you want to hear more about the dewberry?”

“Sure. Can Me-maw make a dewberry pie?”

“The secret recipe has never been written down, and no one remembers where to find the dewberries. The secret location has been lost in time.”

I heard Me-maw chuckle in the kitchen.

“Ah! She remembers, but she is keeping the location and recipe to herself.”

I struggled for an answer. “Because that information can only be passed down to someone who possesses the skill to make a dewberry pie.”

Me-maw laughed and muttered, “So lame.”

Allie rolled her eyes and asked, “How can anyone make a dewberry pie if no one can find any dewberries?”

I endeavored to think of a reply.

“She’s got you there, Papa,” Me-maw laughed standing in the doorway.

Ben and Allie stared at me. I needed to come up with something to pique their interest, or else they would go back to their games.

“You know how when you play your games, and you need a secret weapon or something to defeat the bad guys?”

“Yeah,” Allie said getting ready to slide off the couch.

“You have to unlock a secret passage or do something super awesome and you get exactly what you need to win the game.”

“Is that the best you can do?” Me-maw shook her head and headed back to the kitchen.

“Yeah, I think I’m going to download a new game,” Ben said. He rubbed Scout’s ears then stood up.

Oh, well I tried, but it’s hard to beat the laptops. I sighed and looked at the photo on the wall of my father, Uncle Bob and Aunt Lorna. “Scout, what do you have to say? Would you like to try a dewberry pie?”

She looked at me and purred louder.

“Hey! What the heck!” Ben hollered.

“What’s going on?” Allie yelled. “My laptop has gone bonkers.”

They stood up, held out their laptops to let me see them.

I grinned, pointed and said, “Those are dewberries!”

Scout closed her eyes, but I swear she was smiling.

2 Replies to “The Legendary Dewberry”