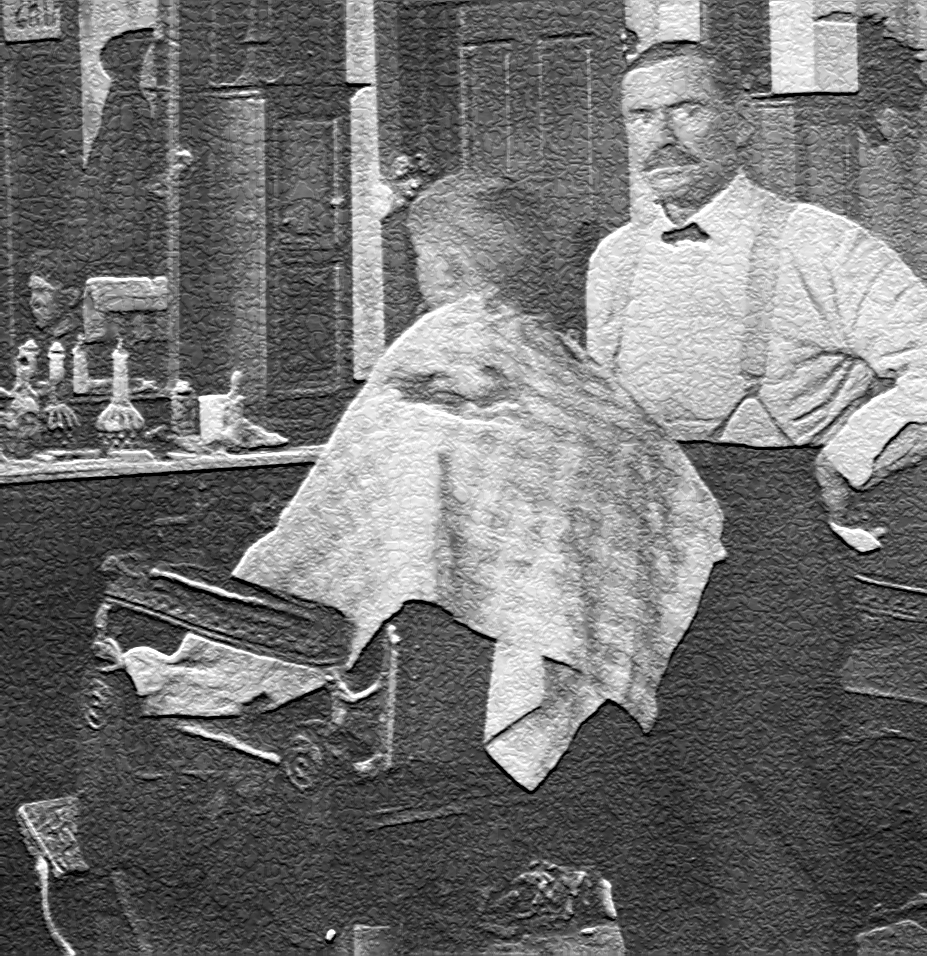 I spent two hours yesterday morning sitting in my recliner, sorting through a box of old black and white photographs and explaining who was in the photo, or where it was taken, to my grandson, who sat next to me on my ottoman. I hadn’t seen some of the old, faded photographs in fifty years. All of them taken in Kinmundy Junction, the small town where I lived as a child. I pulled another one out of the box and stared at it. It was a photograph of the inside of a barbershop. There was a lone barber chair to one side and in the middle of the room was a stove with a stack of wood beside it. I looked closer at the barber’s chair and could make out an image of a young boy sitting on the chair. The barber stood beside him wearing suspenders and a bow tie. He was holding a pair of scissors in one hand as he gazed at the photographer. I smiled, leaned back, closed my eyes and allowed my mind to drift back in time.

I opened my eyes and handed the photo to my grandson.

“Many years ago, in the days of the great depression, there was a dilapidated building directly across from Jess Whitney’s General Store. There were empty lots on either side of it, and the town’s barber used it.”

“Is that you getting a haircut?”

“It is,” I answered. “And I’ll tell you a story about the man giving me the haircut.”

I laughed and shook my head. “Not quite that old, but he was a rather interesting man…”

“I want to hear the story.”

“Okay, his name was Clough Batsford…”

“What kind of name is that?”

“English. Welsh to be exact. It was spelled C-L-O-U-G-H, but pronounced to rhyme with bluff. He had an accent, and was difficult to understand at times, but he loved to tell stories of his homeland.”

“He lived in a small town called Pendodridge in Wales as a lad. He was a teen when he came to this country in the 1860s.” I looked at the photo again. “He was in his 90s in this picture, but he dyed his hair and mustache to look younger. Somehow he ended up in Kinmundy Junction. He said it reminded him of his home in the mountains. The men in town would come into the shop to listen to his stories about the old country. I remember one time when it took over an hour for my father to get his haircut.”

“What kind of stories would he tell? Would I think they’re boring?”

“You might. He lived on a farm in the hills east of town. Mountains he always called them.”

“We kinda live in the Kidwelly Mountains. In the foothills at least.”

“Yes, Kinmundy Junction was settled in the 1840s by people who moved from Scotland and Ireland to the Appalachian Mountains and then to this area. The town grew when the railroads came through. That’s when Junction was added to the name. Our valley is one of the few places around here with a pass through the mountains.”

“Who named it Kinmundy? That’s such a weird name.”

I chuckled. “It’s the only town in the country, maybe the world, with that name. There’s supposedly a lake in Scotland called Loch Kinmundy.”

“Tell me more about Clough.”

I stared at the photo, sighed and began, “He claimed his family could trace their ancestry back to the days of King Henry the Eighth. Supposedly, a later king granted one of his ancestors a lot of land and a royal title. He was the first Duke of Wycoller.”

“Was he like a knight? Did he wear one of those suits of armor and ride a horse and kill people with a sword?”

“Possibly, but Clough never mentioned that. He would close his eyes and describe the village of

Pendodridge. All the houses were built of stone with thatched roofs and there was a wall around the town.”

“To keep out the bad guys?”

“To protect the village in the old days. Clough lived in the mountains, and it would be a treat to go into the village.”

“Like when you were a kid living on the farm and would walk into town, huh?”

“I suppose. Clough would tell stories about raising sheep and doing his chores. He was responsible for feeding the pigs and bringing water from the spring.”

“He wanted a better life, I suppose. He worked on a ship for several years and was once shipwrecked off the Irish coast. He survived by clinging to part of a wooden chest for several hours until he drifted close enough to the coast to swim to land.”

“Maybe he was a pirate.”

“What else did he do? Anything cool?”

“He flew hot air balloons and once crossed the Irish Sea.”

“He came to this country in time to fight in the Civil War.”

“For the North or the South?”

“The North. He joined a regiment of men from Scotland even though he was rather young. After the war he settled in this area, he got married and had two daughters. Rachel and Seren. They married two boys from the area. Grahame Goodwick and Deian Gwilym.”

My grandson stared at me with a puzzled expression.

After a time, he pointed to a photo on the wall above my desk and asked, “Are you talking about your grandparents?”

I smiled and nodded. “Clough Batsford was my great-grandfather and that makes him your great-great-great grandfather.”

My grandson thought about it for a few seconds, stood up, smiled and slashed the room with an imaginary sword. “That makes me a real knight and the future Duke of Wycoller.”