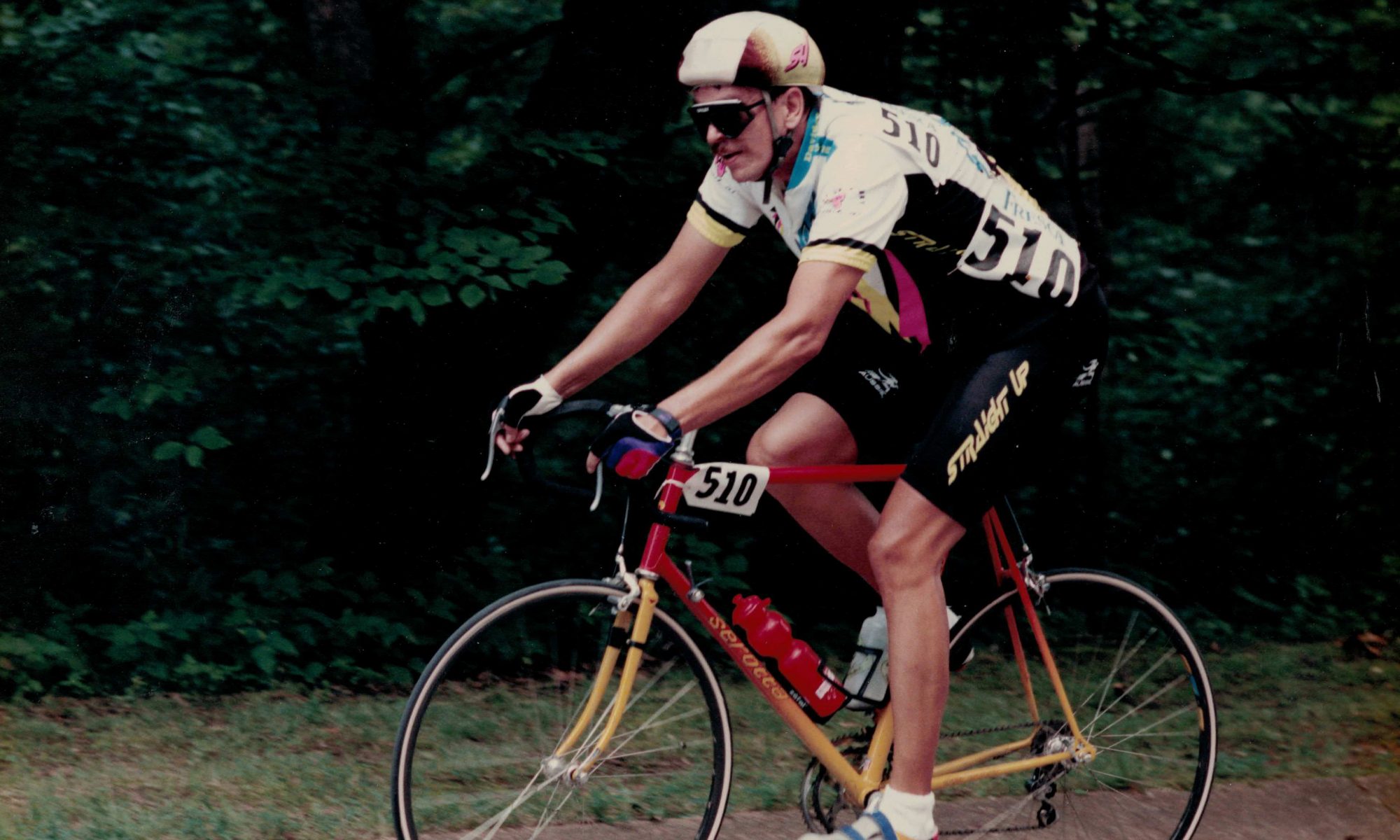 Many decades ago, when I was a young man in my 30s, I played basketball and softball in various leagues. I was in pretty decent shape, but I had gained weight since I got married. I decided to buy a bicycle hoping to lose a few pounds. Though I rode my bike constantly as a youngster, I hadn’t owned one since I received my driver’s license. I bought cheap bikes for myself and my wife. I rode my heavy department store bike around the neighborhood. She rode hers up and down our block. Occasionally. Eventually, I was joined by Mark Donaldson the young man, still in high school, who lived across the street. This was before I joined a bike club and got serious about cycling. Mark and I ventured far afield from the neighborhood. We rode all the way to the village of Plainfield, which was a whopping ten miles away. Maybe a little less than ten miles, but it was the farthest we had ever ridden from home. We did that more times than I can remember when the road was a narrow, tar and chip road without much traffic. Now it’s busier than Lake Shore Drive on a Wednesday morning.

Fast forward a couple years. Mark and I had upgraded our bikes. We decided to do a trail ride in Wisconsin. My wife would go along to act as our support vehicle. The Elroy-Sparta Trail was built on an abandoned railroad track. It was 32.5 miles long and would be our longest ride ever. There were several cool tunnels along the trail. We drove into Wisconsin, stayed overnight and rode the trail. Since it was built on a railroad track, the trail was almost perfectly flat. That fueled our desire for longer rides.

We planned another adventure. We would ride from home into Wisconsin and back. Totally unsupported this time. I purchased racks for my bike. Front and back. I could carry everything I might possibly need for the trip. Clothes, spare tubes, tools, food, water, medical equipment. I was prepared for any situation. Of course my bike now weighed a ton and going uphill presented more of a challenge. Mark, being younger and lighter, was able to climb like Sir Edmund Hillary.

I don’t remember many details about this trip other than staying overnight in a small Wisconsin town and ordering a pizza. One perk of riding so many miles was we could eat like gluttons. We made it home and prepared for an even bigger adventure. We decided, or I decided, I don’t remember who came up with the idea, but we would ride from the deep south to the far north. Of Illinois! Saner minds prevailed – probably my wife’s – and we shortened the trip. We would start at my uncle’s house in Centralia and ride home. Still a journey of over two hundred miles taking the roads less traveled.

If you ride a bicycle often enough, two things will happen. You will crash occasionally, and you will have a flat tire. Up to this point, I hadn’t had a flat tire. To prepare for our longest trip ever, I bought puncture-resistant tubes for my bike. An ounce of prevention is worth a pound of cure, right? The first day of our state-long excursion I had a flat tire outside of Salem, Illinois. So much for the heavier tubes.

By looking at a current map of Illinois, (actually, the tattered 1987 atlas I wisely purchased from the local bookshop for my overlanding adventures.) I can trace the most likely route Mark and I took. We zigged and zagged while staying in Illinois and making progress toward our destination. I’d like to think I’ve gotten better at navigation over the years, but maybe not. Mark and I rode our heavily-laden bikes up and down the hills of Central Illinois for days. Okay, there must have been a hill in there somewhere. I’m sure after hours in the bike saddle, riding in the searing sun and 200% humidity, staring at cornfield after cornfield after cornfield, our minds ceased to function normally. Not that my mind ever functioned normally. My brain would have been labeled like the one in Young Frankenstein.

I think we made it to my brother-in-law’s farm outside of Clinton, Nebraska, before we threw in the towel. My wife came to the rescue and brought us home.

If memory serves correctly, doubtful, but it’s all I’ve got, that was our last bike trip together. Mark graduated from high school and ended up at SIU-Edwardsville, a college close to St. Louis. A few years later, he bought tickets to one of The Who’s farewell tours, and offered a couple to me. The concert venue was Busch Stadium, the home of the Cardinals. My cousin Paul joined me for the memorable concert.

After that, I lost touch with Mark. We moved out of the subdivision where his parents still lived. He graduated from college, and I think he got a job in the St. Louis area. In my mind I picture him as a young college-age man, but unless he discovered a cure for aging, he probably has gray hair, a larger waist and, hopefully, several grandchildren.

I credit Mark for reigniting my interest in cycling. If not for those rides to and from Plainfield, I probably would have taken up golf, or bowling. Somehow, I don’t think blogs titled Adventures in Bowling would have the same impact*.

*My wife is making me explain this. Impact = crashing my bicycle. A bowling ball crashing into the pins. Never mind! I’m going to search my tattered 1987 atlas for somewhere new to explore.