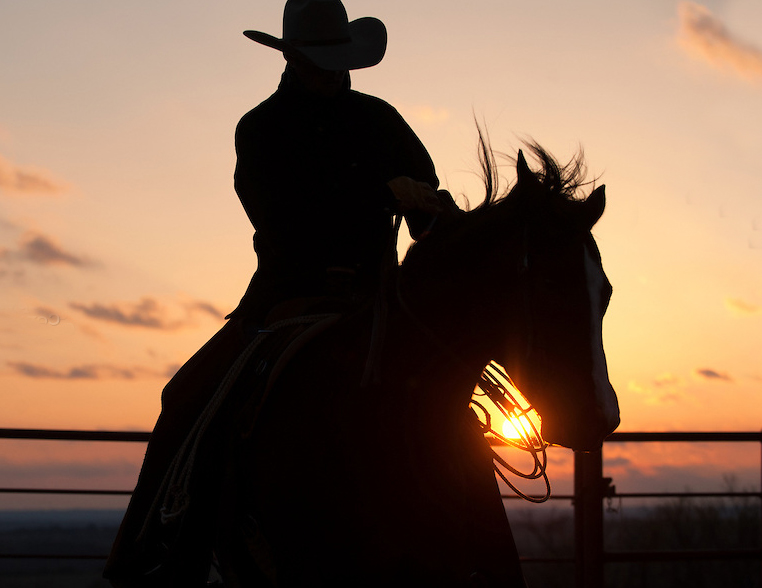 I sat in my recliner and sorted through a box of old black and white photographs I hadn’t seen for over fifty years. All of them taken in the small town where I lived as a child. I pulled another one out of the box and glanced at it. A man held a guitar as he sat astride a horse. At first, I thought it might be a photo of one of my uncles or even Grandpa. I looked closer and realized that was not the case. I smiled, leaned back and closed my eyes as I allowed my mind to drift back in time.

“Son, would you like to go into town with me?” Dad asked on a Saturday morning, as I lay on the floor in the living room listening to The Lone Ranger on the Philco radio.

“Can we go after this?” I didn’t want to miss a moment of my favorite show.

“All right, but we will need to hurry.”

The program signed off with the usual “Hi-Yo, Silver, away!” I jumped up and let Dad know I was ready.

“We’ll be back in about an hour or two.” He kissed Mom’s cheek.

We often walked the half mile into town. Dad said we needed to save the gas for important trips. I didn’t mind walking. I shielded my eyes against the sun in the cloudless sky as I ran ahead on the dusty, dirt road. I picked up a pebble and tossed it into the thick woods that crept close to the road. Dad chuckled as I scattered three female pheasants.

Thirty minutes later, we arrived in town. I looked down the main street. The only paved street in town.

“It’s a surprise. Someone special is coming to town.”

“Who?” My curiosity overwhelmed me. I couldn’t imagine who would draw everyone in town to the main street.

We walked closer and stopped outside of Jess Whitney’s general store. Dad said howdy to a bunch of men in faded, dirty overalls. I watched as one of them spit his tobaccy into a rusty coffee can at his bare feet.

“Looks like the whole durn town is here,” one of the men mentioned.

“Look! I think I can see him,” another shouted.

He picked me up and sat me on his shoulders. Everyone stared as a man on a large black and white horse trotted into town. He held onto the reins with one hand and waved a battered cowboy hat as his horse reared up on his hind legs.

“Is that the Lone Ranger?” I asked, as I frantically waved my hands to catch his attention.

“Just listen,” Dad said as he patted my knee.

The cowboy waved his hat as his horse pranced closer to the crowd of people. One of the men in dusty overalls grabbed the reins and the horse stopped right in front of us. I thought the cowboy looked right at me as he spoke.

“Howdy, y’all! My name is Tex Boyd, and I’m the last of the singing cowboys.”

The whole crowd of about thirty cheered, even the old men in their dirty overalls. He talked for a couple of minutes about cattle round-ups and sitting around a campfire at night singing songs.

“Would you like to hear a song?” He pulled a guitar from behind his saddle and strummed it a couple of times. “How about Back In The Saddle Again? Do you know that one?”

The crowd hollered, then got real quiet as he started to sing, “I’m back in the saddle again. Out where a friend is a friend…”

I listened as he sang four or five songs, then a man put his guitar away for him.

“Well, it’s been good to see y’all, but I gots to mosey on down the road.”

I could swear he pointed right at me and said, “Now y’all be good cowboys and cowgirls and listen to your Ma and Pa, y’hear.”

I nodded as he turned his horse and pranced away. I could hear him singing as he rode out of town. “I’m the last of the singing cowboys. Singin’ songs of inspiration and joy.”

I opened my eyes and grinned, even as a tear escaped my eye. That was the first time I ever saw Tex Boyd, the self-proclaimed last of the singing cowboys. I saw him a few more times over the course of several years. The last time he came to town, I stood tall enough to see him on my own. Then he disappeared. I remembered asking Dad if he would ever return.

“No, he won’t be comin’ back anymore. He passed on to that cattle round-up in the sky.”

I understood what that meant. “Well, I hope that Tex Boyd is having a good time singing songs around a heavenly campfire.” I fought back tears, then added, “Pa, do you think he’s still blind?”

2 Replies to “Last of the Singing Cowboys”