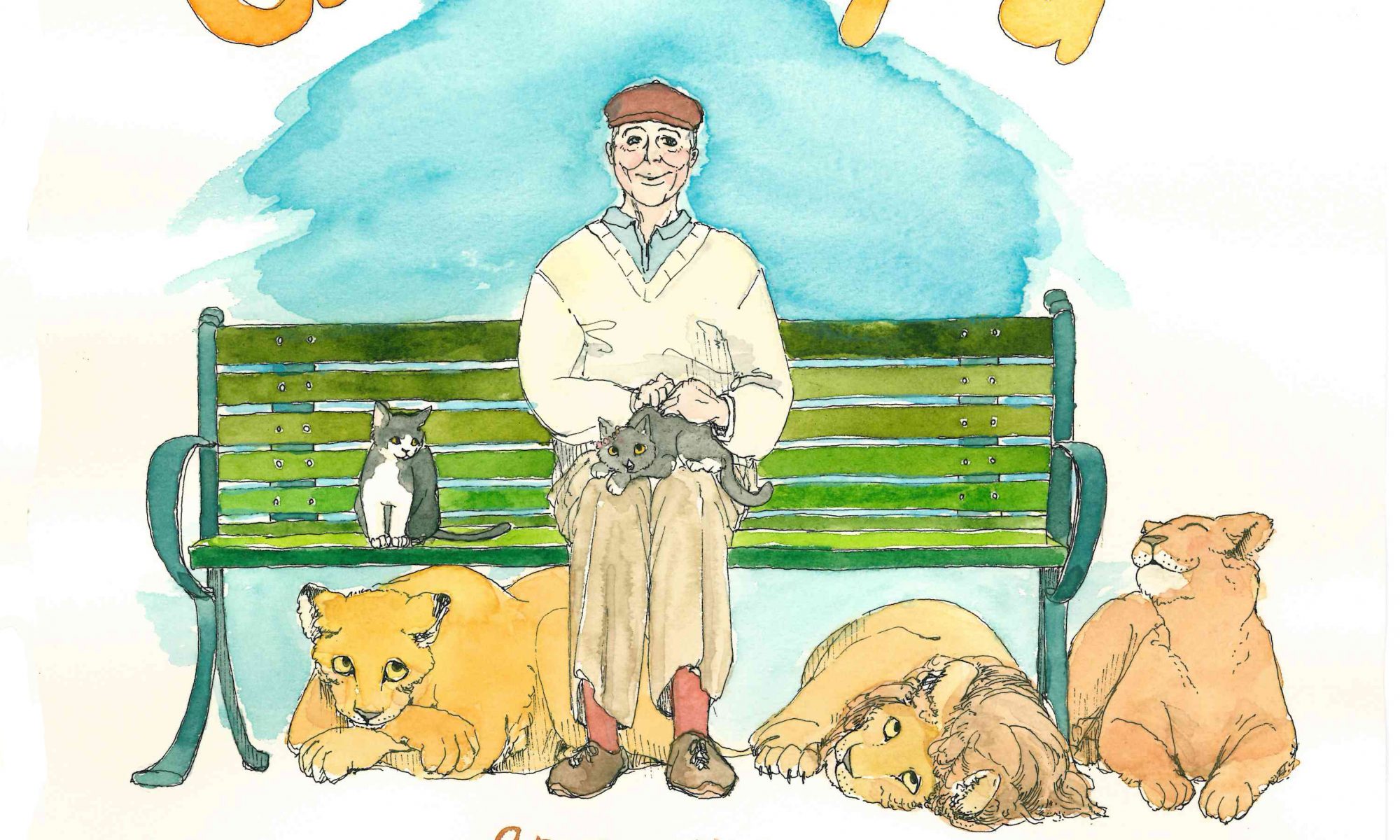 Years ago I started writing simple stories for my granddaughter who was one or two years of age at the time. Now she’s much older and reads novels and solves complex math problems. Many of the early stories were about the cats who lived with Grandma and me and three lost lonely lions who were orphaned and needed a place to stay. They chose to live with us. Their names are – Trahini, the oldest and only male – Drahiri, the second oldest – and Samantha, the youngest and most spoiled. Those stories were released in a book called Grandpa and the Three Lost Lonely Lions. (Along with several other short stories I wrote years ago) I haven’t written a ‘lion’ story for several years, so I thought I would add another chapter to the list. Here goes.

“Grandpa! How much longer do we have to stay inside?” Drahiri asked sitting by the front door and looking out into the sunshine.

Grandpa and Trahini were taking naps in the living room. Samantha, the youngest of the three lions, skipped up beside her older sister at the front door and stared outside. “It’s such a nice day. I’m going to go nuts if we have to stay inside all spring.”

Just then Scout and Treat walked out from the kitchen, where they had been helping Grandma, and joined Drahiri and Samantha at the front door. Treat swatted at Samantha’s tail and she jumped.

“Stop pestering Samantha,” Scout, the Queen of the House, commanded.

“I’m just teasing her. I wasn’t going to hurt her,” Treat replied.

Treat was known as the mightiest hunter in all the land and Samantha was still frightened by him.

“Make sure you don’t,” Scout said. She walked over to Grandpa, jumped onto his lap and tapped his jaw. “Wake up, Grandpa.”

Grandpa slowly opened his eyes. “What is it, Scout? I was taking a cat nap.”

“I know we are supposed to stay inside, but do you think it would cause any harm if we sat on the bench on the front porch. We promise not to go any farther. I’ll make sure Treat agrees because I know how anxious he is to go on a hunt for those fearsome bunny rabbit creatures.”

Trahini raised his shaggy head, perked up his ears and opened his eyes. “I’d sure like to sit in the sun and maybe roll around in some dirt.”

“Please, Grandpa, please!” Samantha begged as she bounded over to Grandpa’s chair.

Grandpa sighed deeply, thought for a moment and stood up. “Okay, but you have to promise to stay on the porch with me.”

“Could I stay in the flower bed right in front of the porch?” Trahini asked. “I won’t go any farther than that.”

“Okay, Trahini and Treat can roll around in the dirt, but everyone else has to stay with me on the porch.”

Grandpa led the way to the front door, paused for a moment and opened it. Trahini, Treat, Drahiri and Scout walked slowly outside and took deep breaths of the warm, fresh air.

“Are you coming, Samantha?” Grandpa asked while holding the door open.

“Okay, but I’m a little bit scared. I haven’t been outside in so long. Is it safe?” she asked as her voice trembled.

“You can sit with me and Scout on the bench,” Grandpa said.

“Don’t worry,” Treat reassured Samantha. “I won’t anything hurt you. Remember! I’m the mightiest hunter in all the land!” he said proudly.

Scout rolled her eyes and waited for Samantha. Then she sat on one side of the bench making sure Grandpa had room in the middle. Drahiri took up her usual spot on the porch by the large flower pot. Samantha stuck her nose out the open door and sniffed the fresh air. Slowly, she edged out the door and immediately jumped onto the bench next to Scout.

“We’ll be on the porch!” Grandpa shouted to Grandma, who was in the kitchen making blueberry muffins. He sat in the middle and watched Treat and Trahini rolling in the dirt. He patted Samantha’s paw and whispered, “You don’t need to be afraid.”

Scout surveyed her domain and sighed. “The sunshine sure feels good. Do you think one of these days we might be allowed to go for a walk around the neighborhood?”

“I sure hope so,” Grandpa said.

Just then Grandma came to the door and announced, “The blueberry muffins are fresh out of the oven. Come and get them while they’re warm.” She backed out of the way expecting everyone to rush inside for one of her famous blueberry muffins. Instead, no one moved. “Did you hear me?”

“We heard you, Grandma, but would you mind if we enjoy the sunshine for just a little longer?” Scout asked.

Scout jumped onto Grandpa’s lap to make room for Grandma.

Grandpa put an arm around her shoulders and smiled. “It does indeed.”

So, if you are walking around our neighborhood, and you see Grandma, Grandpa, two cats and three lions sitting on the porch (or rolling around in the dirt), do not be alarmed. We are simply enjoying one of our old life’s simple pleasures.